PalmarèsADISQ par Stingray was born out of Stingray and ADISQ’s shared mission to promote and showcase the Quebec and Canadian music industry, help develop the careers of local artists, and provide audiences with access to a diversity of homegrown talent.

Although PalmarèsADISQ par Stingray’s programming mainly spotlights Francophone music from Quebec, the province’s Anglophone artists and French-language artists from across the country, and the world are also showcased. The channel was created to delight both fans of musical discoveries and nostalgia buffs. PalmarèsADISQ par Stingray presents a curated all-day programming, themed blocks, exclusive countdowns, and best-of lists.

Programmed by Stingray’s team of in-house curators with the support of ADISQ experts, PalmarèsADISQ par Stingray will be broadcast 24/7 and present all the local music videos that fans can never get enough of; from today’s chart-busting stars to tomorrow’s most exciting newcomers and yesterday’s icons.

Pursuant to Stingray’s desire to invest in young talent, a portion of the profits generated by PalmarèsADISQ par Stingray will be reinvested in local music video production through existing third-party funds. Through this initiative, Stingray will finance the production of music videos broadcast on its channels and help develop the career of up-and-coming Quebec and Canadian directors.

Stingray will share more information about this initiative in the coming months. 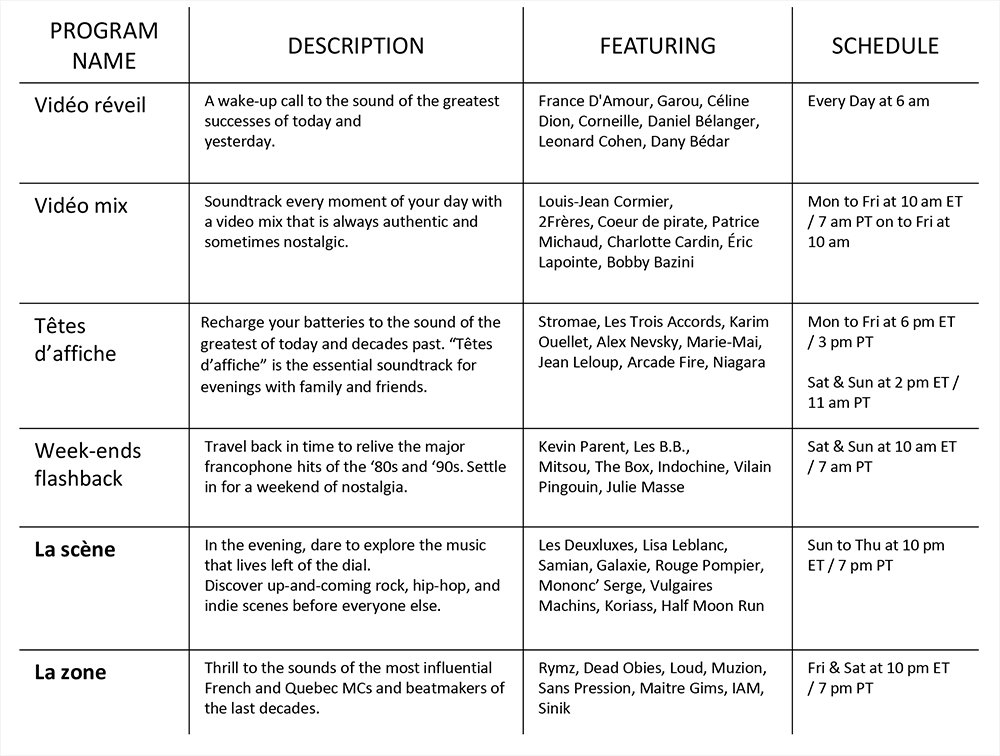 “For too long, local music makers have not had a dedicated television platform, which has hurt their discoverability and the production of homegrown music videos,” said Eric Boyko, President, Co-founder, and CEO of Stingray. “Today, we are proud to announce a partnership with ADISQ and investments in the production of local music videos to showcase, encourage, and promote Quebec and Canadian French-language musicians. We are thrilled to be in a position to support the careers of talented artists from Coast to Coast and to have already found enthusiastic distribution partners in Bell, Cogeco, TELUS, and Videotron. We believe in our country’s talent and have always been a champion of Quebec and Canadian music, both at home and abroad. PalmarèsADISQ par Stingray is the only music television channel created especially for our artists and we look forward to seeing it added to the offering of operators across the country.”

“At a time when Quebeckers have access to an unprecedented and literally infinite amount of music, it is more important than ever to promote the visibility and discoverability of local French-language content," declared Solange Drouin, Vice-President, Public Affairs and Director General, ADISQ. "The launch of the PalmarèsADISQ par Stingray television channel, which will showcase our artists’ music videos, and thereby their talent and diversity, is excellent news for the entire Quebec music industry - and for fans! Quebeckers may consume a lot of music videos on the internet, but television still holds immense power when it comes to discovering new artists and their music. Initiatives like the one we are launching today are crucial for our artists to continue to be loved and to shine.”

“Quebec and Canada’s artists and musicians are among the best in the world. I am thrilled that Stingray and ADISQ will be working together to showcase our amazing homegrown talent on their new 24/7 specialty channel dedicated to Quebec and Canadian French-language music videos. PalmarèsADISQ par Stingray will provide an incredible platform to strengthen and grow the Quebec and Canadian music industry, and develop our local artists.” -The Honourable Mélanie Joly, Minister of Canadian Heritage

“Bell has supported Québec artists and promoted French-language music for many years through partnerships with numerous events, organizations, and festivals, including our recent historic sponsorship agreement with Francos de Montréal,” said Nicolas Poitras, Vice President, Bell Residential Services. “We are pleased to expand on our support for homegrown talent by showcasing both emerging and well known French-language artists on the new PalmarèsADISQ par Stingray channel, which Bell Fibe TV customers will be able to watch at home or on the go with the Fibe TV app.”

“For over 60 years now, Cogeco Connexion has been deeply involved in the community it serves through the community TV stations we operate. This evolution in our offering embodies Cogeco’s ties to the Quebec and French-Canadian communities and is consistent with our ongoing commitment to better meet the changing needs of our customers,” stated Johanne Hinse, Vice President, Sales Consumer market and Community relations, Cogeco Connexion. “By giving them access to rich and diverse television channels with highly superior content, such as this new PalmarèsADISQ par Stingray, we contribute to the identity of Quebec and French-Canadian culture, while offering our customers an optimal entertainment experience.”

“TELUS and Quebec music enthusiasts share a common passion for la Belle Province’s local culture,” says Marie-Christine D’Amours, Vice President, Consumer Market at TELUS Quebec. “For more than 15 years, TELUS has been committed to promoting the talent of local emerging artists, by supporting venues and festivals across the province, including the MTELUS, Les Grandes Fêtes TELUS, and Le Festival Musique du Bout du Monde. PalmarèsADISQ par Stingray will allow Quebec-based artists to shine in every corner of the province, as viewers are entertained watching in the comfort of their homes and on the go on their phones.”

"Videotron has always given pride of place to local musicians, which is why we are delighted by the launch of a television channel dedicated to broadcasting their music videos,” said Caroline Paquet, Vice-President Marketing and Content at Videotron. "Already available to our subscribers, PalmarèsADISQ par Stingray, a unique showcase for the creativity of Quebec talent and musical discoveries, will delight music lovers from all walks of life."